The information in this article applies to:

I need an object that isn't in any of the symbol libraries. Is it possible to create it using the tools available in Chief Architect? 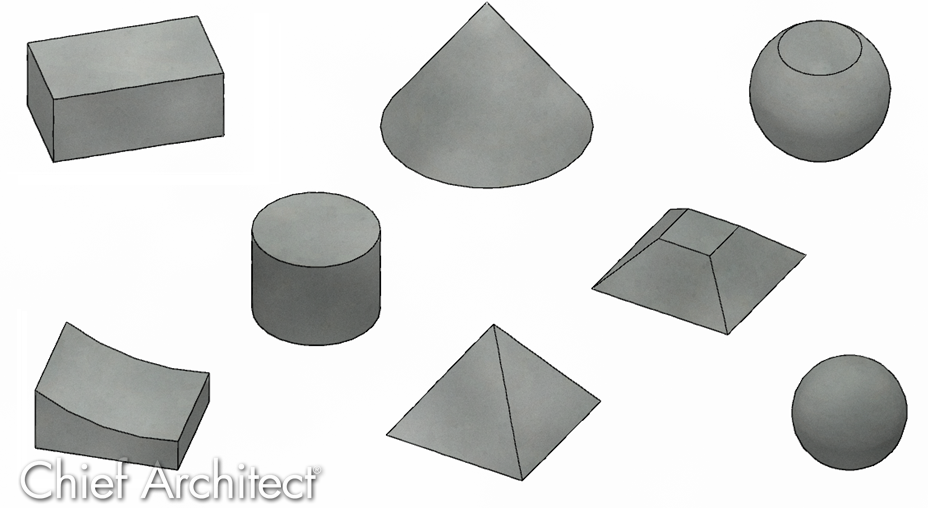 Chief Architect has a series of drawing and editing tools that enable you to create a variety of custom 3D objects.

Before you consider creating a custom object, first look in the Library Browser to see if what you're looking for already exists. In addition to the Chief Architect Core Catalogs, Bonus and Manufacturer catalogs are available for download by accessing the 3D Library.

If you're unable to locate the object you're searching for, then consider which tools you will need to use to create the object in Chief Architect. You can combine tools as well – for example, you might have an object that combines 3D/polyline solids with molding polylines. As you become familiar with the tools and techniques mentioned below, you will likely find increasingly creative ways to employ them. You can use these tools to make highly designed architectural elements, trim details, or any number of miscellaneous objects that add that perfect finishing touch to your renderings.

Once you have finished modeling your creation, you can create an architectural block that groups the separate objects into a single item and then add the block to the library.

The Primitive tools allow you to create solid geometric shapes, which can be combined to create a wide variety of custom solid objects. Navigate to Build> Primitive

to display the Primitive tools.

3D/polyline solids are polyline shaped 3D objects with a specified thickness. They can be oriented either horizontally or vertically and are useful for creating custom details anywhere in your 3D model.

A molding line or polyline is a profile shape that is extruded along a path. The profile shape can be one that you have drawn, or it can be one that was included with the Chief Architect library. As their name suggests, molding lines/polylines are great for adding moldings to a room, but the tool is versatile enough to be used for so much more. Navigate to Build> Trim> Molding Line

, then click and drag to create a line or polyline in your plan. This line or polyline can then be opened to specification, and a profile shape can be added by accessing the Moldings panel.

When would we use molding polylines instead of polyline solids? Polyline solids are very useful, but they do have limitations. A polyline solid can be thought of as a shape that is extruded along an axis. Implicitly, the shape of a polyline solid is restricted to a single plane; so if you draw a polyline solid in an elevation, for example, it will look rectangular in plan view and in other elevation views that approach from a different angle.

, then click and drag in your plan to place a 3D molding line or 3D molding polyline.

What if you wanted to draw piping that traveled up and down and also turned 90 degrees with your walls? You would use 3D molding polylines.

Soffits are simple to use and have a number of advantages that other 3D Objects do not. For instance: they bump against walls, floor and ceiling surfaces, and other soffits rather than pass through them; their vertical positioning is measured relative to the floor height of the room they are in rather than an absolute elevation; and molding profiles can be easily applied to soffits on the Moldings panel of the Soffit Specification dialog.

The Soffit is a member of the Cabinet tools family. To place a soffit, navigate to Build> Cabinet> Soffit

, then click in the plan to place your soffit. Soffits will take on the size and properties set within the Soffit Defaults. You can move, resize or rotate soffits in plan view by clicking to select it and then manipulating the various handles. You can also resize and reposition in any type of camera view.

Think of the soffit as a basic building block. While their intended purpose is to fill the area above wall cabinets, they can be used to create steps, wall accents, or any object that can be represented as a series of boxes.