“Architecture is not just about buildings,
but about nourishing the lives of those within them.”

If you haven’t yet heard of Michael Rust, you will be glad you took the time to learn a little about him and his work. Michael, an architect based out of Chandler, AZ, first sparked our interest when his organic, Frank Lloyd Wright-inspired design was entered in the Chief Architect Residential Design contest. Located in Webb City, MO, this incredible home was designed in harmony with its steeply sloping lot. This posed challenges during the design phase but, with Rust as the architect, those challenges inevitably inspired its magnificent lines, grand exterior staircase, cantilevered awnings, and towering windows that let the views of nature climb right inside.

As the Webb City design may hint to fans of Wright, Michael holds one of the first Master of Architecture degrees from the Frank Lloyd Wright School of Architecture. As an apprentice in the school’s Taliesin Fellowship, he was mentored by top architects in the field who were direct apprentices of Frank Lloyd Wright. Michael worked very closely with John Rattenbury who assigned him the role of project architect for the famed Waikapu Valley Country Club clubhouse in Maui, now known as The King Kamehameha Golf Club.

Like Wright, Rust utilizes natural and sustainable materials in his designs. Wood elements and stone are a staple in his plans. Wright said he had, “never been fond of paints or of wallpaper or anything which must be applied to other things as a surface…Wood is wood, concrete is concrete, stone is stone.” It is clear the sentiment is also true for Michael’s work.

The Hinshaw Residence, designed by Michael Rust in Prescott, AZ is another example of Rust’s quintessential style. Designed on a steeply sloping lot with nothing but views, Rust aimed for the house to flow organically and become one with the natural contouring of the land. The way this home blends in with nature is reminiscent of the way that Fallingwater, arguably Frank Lloyd Wright’s most well-known residential design virtually erases the line between what is natural and what is man-made. The natural elements on and around the lot were the muse which inspired the selection of exterior materials. Decorative fascia is meant to echo the horizon line. Clerestory windows dissolve the barrier separating the home’s interior and exterior and give the sun a place to rest its warm light while a stone fireplace roots the home to the earth. It is a home in harmony with nature.

Michael Rust has been working with Chief Architect software to produce renderings of his work for the past 15 years, since version 9. He credits Chief Architect with allowing him to “instantly capture the essence of the design.” With the upcoming release of X11, we were actively seeking the ideal home to showcase on our Premier product box. Often, we license professional photographs of homes and replicate them using Chief Architect Software for use as sample plans available to our users. This time we decided to reach out to our talented Chief Architect customer base in an effort to find the ideal home design to feature. We posted a request for designs on ChiefTalk, Chief Architect’s professional forum, as well as on our various social media platforms including Facebook and Instagram. Also considered were the entries from prior Chief Architect Design Contests. We then compiled all of the incredible customer-created designs and began the process of narrowing the field down to a few finalists. It was a difficult decision, however, we found Michael Rust’s house to be the best fit. The modern design characteristics, architectural details, and the Frank Lloyd Wright style really made Michael’s design stand out.

Another important factor in the decision process is related to the overall proportions of the design and how well it looks when cropped to fit in a relatively narrow and tall space of the product box. Michael’s design really excelled in this area which sealed the deal for us. 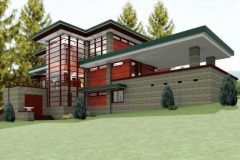 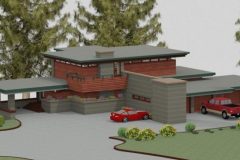 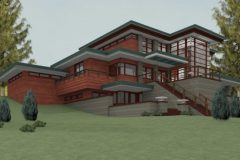 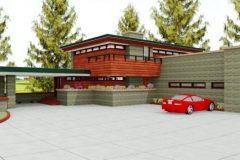 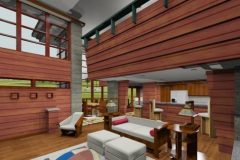 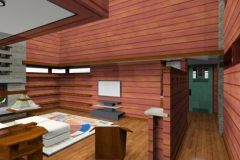 In addition to its feature on the cover of Chief Architect Premier, Rust’s house is proudly displayed in various marketing materials and on top of our lighted booth at the International Builders’ and Kitchen & Bath Industry Shows. According to The Frank Lloyd Wright Foundation, “Architecture is not just about buildings, but about nourishing the lives of those within them.”

According to The Frank Lloyd Wright Foundation, “Architecture is not just about buildings, but about nourishing the lives of those within them.” Michael Rust, this generation’s Organic Architect, is building monuments to his mentor and with that, creating his own legacy to nourish the lives of those who inhabit his spaces.

To learn more about Michael Rust, visit our previous blog post, where Michael shows us what it was like to be an apprentice at the Frank Lloyd Wright School of Architecture at Taliesin West.

I was wondering if you design remodels of existing homes and if so how much do you quote for renderings? I am located in Glendora, CA and the current home is a hacienda style but would love to add more natural elements\style

We do not offer services besides training on the software. You may be able to find someone in your area on our ChiefTalk Users Forum, keep in mind that the exchange on the forum is completely separate from Chief Architect and among individuals.

My wife has recently been interested in organic architecture design as prepare to renovate our home. I took to the Internet to find information on it and fortunately for me, I came across your amazing article. I really liked that you mentioned that another important factor in the decision process is related to the overall proportions of the design and how well it looks when cropped to fit in a relatively narrow and tall space of the product box. A great point here, where anyone interested in organic architecture design can agree with. My wife would love this! I’ll be sure to show this to her later,thanks!

Thank you, Dean. We’re so glad you enjoyed the article!